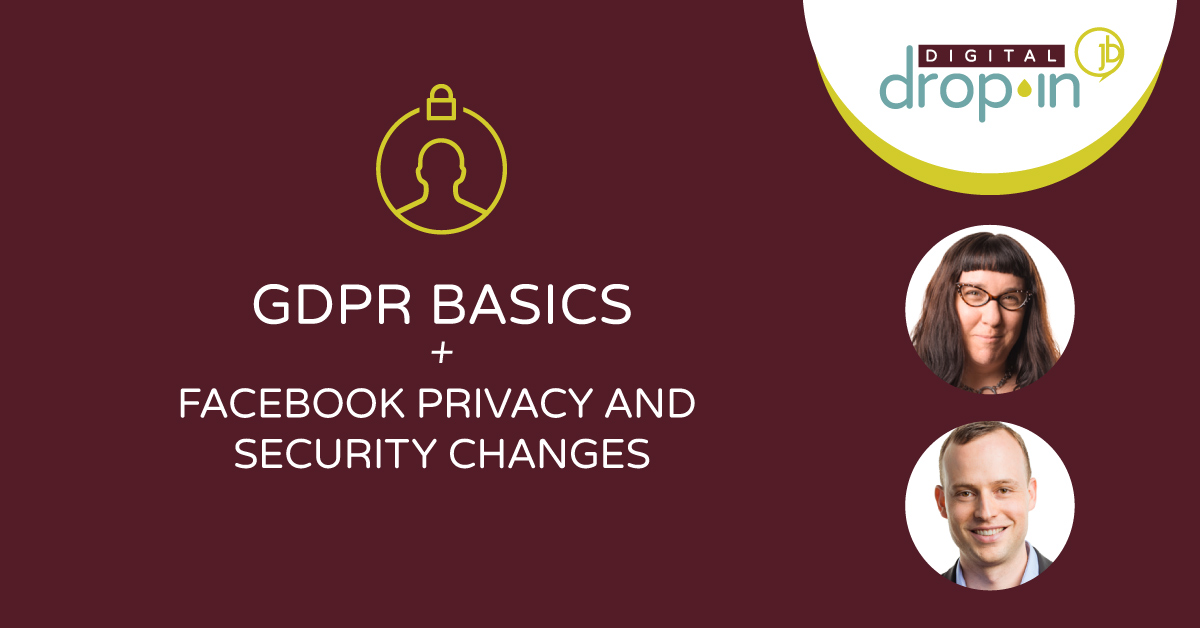 Facebook has been undergoing some major changes lately, especially with privacy and security. In this recent Digital Drop-In webinar, Sarah Benoit discuss Facebook changes, the direct impact of these changes, and what you need to know to successfully move forward. In Part Two of this webinar, Justin discusses the GDPR.

The Facebook Saga Continues: What You Need to Know

Over the last few years, Facebook has been in the limelight—but not for positive reasons. First, multiple studies, including one in the Harvard Business Review, revealed that social media may have negative emotional and mental impact. Humans thrive when they have strong, positive relationships with other human beings. But does this connection apply with online relationships? Some research has concluded yes; but other studies have found the opposite. People who suffer from anxiety and depression may be more negatively impacted from social media.

Research has also shown that the use of social media may:

Next, Facebook was accused of having election ads purchased by Russia and Russian companies. Facebook had to testify before Congress because of this. In remarks to Congress, Facebook said the Internet Research Agency, a Russian company linked to the Kremlin, posted 80,000 pieces of divisive content shown to about 29 million people. Facebook also said it identified more than $100,000 in advertisements paid for by the Internet Research Agency. This content was also on Twitter and YouTube.

So What Happened And What Should You Do?

Part 2: What is GDPR and Should You Care?

The General Data Protection Regulation (GDPR) is a legal framework that sets guidelines for the collection and processing of personal information of individuals who are citizens of the European Union (EU). The GDPR passed in 2016 and officially went into effect in May of 2018.

Even if you are not directly targeting citizens of EU countries, they may still be visiting your website. Fines for noncompliance are very high with $20 million Euros as the standard fine.

In 2013 Facebook announced that they were going to allow advertisers to target hashed lists of existing and potential customers, and categories like role-playing gamers or soda drinkers. This third party data allowed targeting based on purchase behavior and also allowed Facebook to estimate people’s income, net worth, and other characteristics that could be used in Facebook saved audience targeting.

Want to learn more about digital marketing? Join us for our monthly free Digital Drop-In webinars, attend a bootcamp in Asheville, or enroll in the full JB Media Institute curriculum.